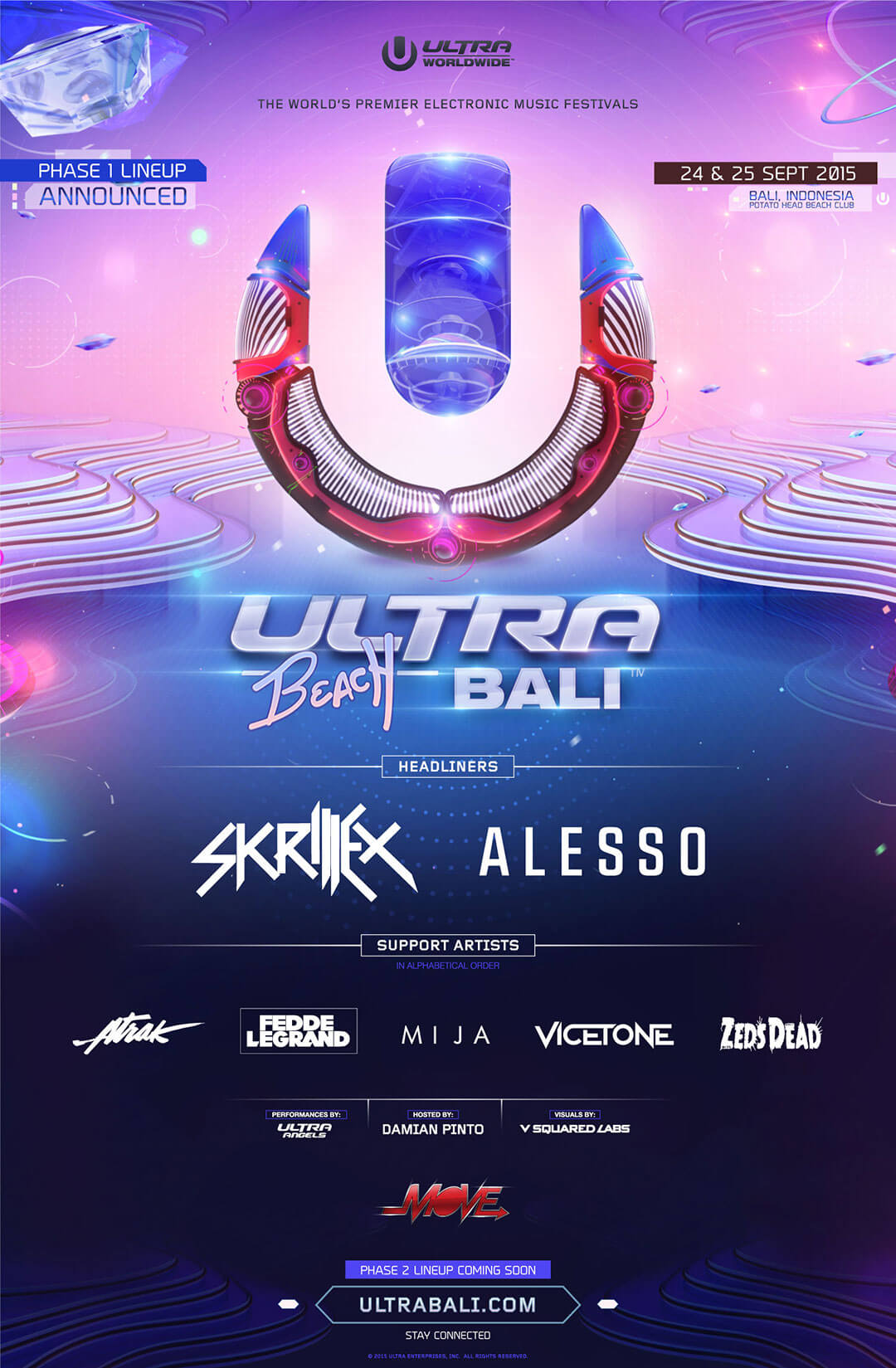 Having officially SOLD OUT within a week of going on sale earlier in July, and without announcing a single act no less, ULTRA Beach Bali now reveals the colossal first phase lineup for its forthcoming debut edition.

Gearing up to take over the chic Potato Head Beach Club in the blissful coastal town of Seminyak on Thursday, September 24 and Friday, September 25, 2015, are some of the very biggest artists on the planet, including confirmed headliners and bona fide ULTRA favorites Skrillex and Alesso.

Undeniably two of the most sought-after and celebrated names in the world of music, Skrillex and Alesso will be bringing their unique performances to Bali for the very first time in September, as they prepare to entertain over 10,000 fans across two consecutive days of sun-drenched fun on ‘The Island Of The Gods’.

Complete with cutting-edge stage production, world-class visuals and the highest quality sound, these heavyweight headliners will be supported by a selection of the most hyped DJs and producers on the circuit right now. Joining the two headliners will be Fool’s Gold Records head honcho A-Trak, ULTRA veteran Fedde Le Grand, OWSLA family member Mija, Toronto based producers Zeds Dead, and Dutch electro house pair Vicetone. Stay tuned for more acts, due to be announced over the coming weeks.

ULTRA Beach Bali marks the penultimate stop of a truly incredible 2015 Asian tour, in which ULTRA Worldwide will have reached destinations including South Korea, Japan, Macau, Thailand, Bali, Taiwan and The Philippines.

Tickets for ULTRA Beach Bali are officially SOLD OUT. The Phase Two lineup is still to be announced. For the most up to date information make sure to stay connected to ultrabali.com.

Choosing to follow a unique, creative vision and a wholly organic growth focused around a true love for music, artists, and fans alike, the ULTRA and ULTRA Worldwide brands represent not only the world’s biggest and most successful remaining INDEPENDENT electronic music festival brand, they are now the most international of any festival brand in the world by far. The event organizers continue to transport the unrivalled experience from the Miami flagship festival to an ever-growing number of destinations and fans all over the globe.

Over the past seventeen years, literally thousands of the world’s most iconic DJs, producers and live acts have mesmerized audiences with awe-inspiring sets at ULTRA festivals in ARGENTINA, BRAZIL, CHILE, CROATIA, IBIZA, JAPAN, KOREA, SOUTH AFRICA and of course MIAMI, as well as ROAD TO ULTRA events in CHILE, COLOMBIA, MACAU, PARAGUAY, SEOUL, TAIWAN, THAILAND, TOKYO, USA, and now forthcoming events in BOLIVIA, BRAZIL, SINGAPORE, THE PHILIPPINES as well as ULTRA BEACH – BALI. Each and every new global edition is founded on the same successful recipe that has been perfected over seventeen years in Miami, combining the most diverse electronic talent with the most technologically advanced, large-scale festival productions in the world.

In addition, the ULTRA brands pioneered the live stream experience, ‘ULTRA LIVE’ (whereby the festival is brought online to over 20 million unique viewers globally) and the audio broadcasting platform ‘UMF RADIO’ (syndicated to FM Radio in over 42 countries and reaching more than 22 million listeners weekly). Also ‘UMF FILMS’ collaboration with FINALKID has seen some of the most visually breathtaking festival aftermovies in the music space, including a feature-length documentary exploring the latest explosion of dance music, entitled CAN U FEEL IT, which premiered at the Ultra Music Festival, Miami 2012 and was exhibited in over 500 theaters across the Unites States.

In 2014, the ULTRA and ULTRA WORLDWIDE brands continued to push the boundaries, bringing an unparalleled combination of cutting edge production and the world’s best electronic acts back to previous strongholds and new frontiers across the globe. With its most recent new festival editions breaking records in JAPAN in September 2014, SOUTH AFRICA in February 2015 and KOREA in June 2015, and with the addition of the many new ROAD TO ULTRA events, the ULTRA brand has now united SIXTEEN COUNTRIES across FIVE CONTINENTS worldwide.